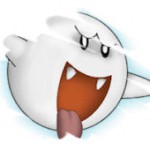 I am busy reading a wonderful compilation of ghost stories published by Readers’ Digest. Many of them are quite extraordinary (exuse the pun) but one stands out with its (semi-transparent) head and shoulders above the rest.

Jean Rhys’ short story, “I used to live here once” is a beautiful, well thought through story which captures the reader’s attention something fierce (boooo!)

Although it is semi predictable from the start, and also somewhat from the title of the story, that the narrator of the story is in fact the ghost (no scares here), I doubt that it was the intention of the author to hide this ghastly revelation to the reader. The great surprise comes later in the story, and the chilling cold that ghosts your own body when you realize what you have just read in these few pragraphs is absolutely spectacular.

Due to copyright infringement possibilities, I can not post the story here, but you can probably find it by searching for “Jean Rhys” and “I used to live here once” in Google. Enjoy! 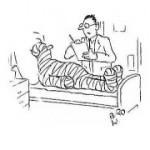 A short story by Kobus Myburgh

“Ahhhhh…” Danny rubs the tense muscles in his neck as he walks on his way to work. Where does this ache come from? And why is he feeling so dizzy? Did he eat something funny? The shapes of the trees around him begin to bleed into each other; dark, oozing and green. The palisades start to look like devil forks, beckoning him to come closer. The faces of people around him seem to laugh at him, their teeth long and sharp. And those eyes, oh so empty… Danny falls.

The pain is becoming more unbearable every day. Why does everybody just stare at him? Why don’t they do something about it? The faces around his bed seem to pity him. Their eyes are wide and sometimes teary. What is going on? Oh! The pain! “Please! I need something for the pain!” his soul scolds the bystanders.

It has been four months since he last moved on his own. Four months since he last uttered a single word. While his eyes were usually closed, his mom often opened them in hope that he can see what is going on around him. His large dark brown eyes were wide open now, howling in pain and fear, dry like the Sahara. It is not only the pain of his aching muscles, but also the pain of the humiliation of being totally incapacitated. He needed someone to wash him, to turn him to prevent bed sores; to feed him and take care of his bodily wastes.

“Still no improvement,” says the one he knew as Father Simon. “I wonder if he will ever wake up.” A high pitched voice out of his range of sight, vaguely familiar, speaks faintly, unintelligible over the rustle of the autumn leaves outside his open window, as if praying to her ancestors. Someone bends over him, stethoscope in hand. Why don’t they warm the darned thing before pressing it against his already nitrogen-fuelled heart?

Mama Jane cries in a wailing tone. Oh, she used to be so brave and strong, for her eldest son’s sake. She didn’t want him to lose hope of ever recovering. Now it seems she has given up, shown by not only in the siren-like anguish in her voice, but also her bent back as she looks down onto him when the two of them are alone in the tiny room.

Danny lies flat on his back, on his rusty spring mattress lain on a high base made of bricks. If he could speak he’d tell them that he didn’t believe in the age-old beliefs of the Tokoloshe. Can you imagine a man with only one arm and leg and the face of an old man on the body of a boy? Ridiculous!

“The Tokoloshe can not reach you now.” Mama Jane said one day, absolutely certain that the evil spirit was responsible for her son’s condition. In spite of his disbelief, Danny sometimes wondered about the Tokoloshe, with the big evil spirit of the devil himself encaged in that small body. He was threatened constantly as a child that the Tokoloshe will make him ill if he was naughty. Does it really exist? Was it responsible for what he is going through now? Was his modern lifestyle in which he openly denies the existence of the creature the cause of why he is bedridden? Are his sins finally catching up with him?

A single tear runs out of the corner of his left eye. He can feel it trickle down his temple, cold and clammy; seemingly emotionless.

“Danny,” his mother said. “You have a visitor. He says he is an old friend of yours, and his name is James. He said he wants to speak to you alone. I didn’t know you had any white friends?” If Danny had the ability to change his facial expression, he would’ve seemed confused. He had very few white friends and definitely not one who goes by the name of James. If Danny could speak, he would’ve shooed the visitor away. James took a seat beside him, and starts to talk.

“Danny, I know you can see me from the corner of your eye, and that you can hear me. I know that you are fully aware of what is going on around you, as long as it is in your range of vision. I also believe that you have probably heard your family talking that you will never speak or move again.”

James stood up, and turns Danny’s head sideways. Their eyes meet and he saw fire in James’s eyes, flaming so intense, like two volcanoes about to erupt. Did the Tokoloshe manifest itself in this stranger?

“Good! You initially thought I may be a doctor here to help you, but you don\’t think so anymore, do you? Do you know who I really am?”

“I didn’t think so. Danny, I know exactly when your illness started, but I was not there. I know the exact day that you collapsed. I know the exact day your ability to move your eyelids returned, even though you didn’t know until 30 seconds ago that you could do that. I know exactly how your symptoms started, and I know what brought it on. Do you know what happened, Danny?”

“I might have been a bit naive to think that you would know. You probably think you are cursed, and even that I am a manifestation of some evil spirit or angry ancestor. Do you have any idea why you think you may be cursed?”

“Four months ago to the day, you broke into a vehicle, caused a lot of damage and stole a lot of what was in the vehicle. Do you remember that?”

Danny became pale, but doesn’t blink. The stranger seemed to notice the flow of blood from his face, and gets a sardonic grin on his face.

“I am the owner of the vehicle you broke into. The vehicle was armed with a nerve-impairing gas that slowly infiltrates your body and incapacitates you within 12 hours – growing on you like a virus, engulfing you, making you gradually weaker and dizzy until you finally collapse. Although there is no antidote, the effect of the gas works out in six months; only two more months to go. But with this bit of good news comes some bad news: the pain will become worse and worse. Do you know why?”

“The pain is becoming worse as your sense of feeling returns. The gas has affected your nervous system, and hence your ability to have any feeling. You were in excruciating pain over the last four months; you just didn’t know it, due to paralysis. Over the next two months, your nervous functions will return to normal and with it your feeling, and at the same time the pain will become less.”

With that, James stood up, smiled at Danny, and walked out of the room. As Mama Jane came back into the room, Danny blinked and faintly smiled at her.