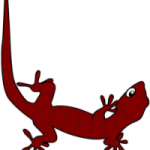 This morning, I rescued a gecko from one of my cats. This was an eye-opener in two ways for me. First, the look on my cat’s face; a look that says: “Dang you! I worked hard for that! You are taking my livelihood away from me!” My feeling of guilt was short-lived though, as something else totally grabbed my focus shortly after.

As I held this little gecko, in total not even the length of my little finger, this brave little creature started to bite me. It bit me with all its might, and with a passion I can hardly describe. I wish I had a chance to take a picture of the event, but it struck me how much of a will to survive the little creature hard.

I stood there for a few seconds, observing the tenacity with which it bit me, and I simply had to admire its will to live. I could squash this little thing like a bug, if I wanted to, and it probably instinctively knew it, but it did not give up. It bit me as if it knew I would sooner or later have to let it go in a yelp of pain.

After a few seconds of watching this brave little thing, a few seconds that felt like an eternity in awe, I went outside and put it down in the garden. This leads me to another thought about where did my cat grab this gecko in the first place, and would it be able to find its way back from where it was initially kidnapped from? We know that cats and dogs can find their way home for miles and miles, but what about this little gecko? Your thoughts?